These are the Kids in My Life 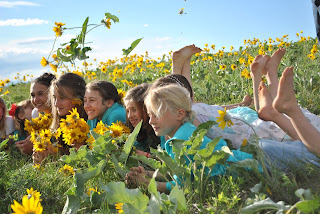 Another Sabbath has come and is almost gone - will be gone by the time I finish writing this. My heart is heavy this evening, thinking about the kids in my life.

I never had any children of my own, and actually know very little about children. They just weren't on my radar. I don't have any regrets over not having any of my own, because some people are just not cut out to be parents. I'm one of them. Here's the problem - not everyone recognizes this in themselves. People who are not cut out to be parents are out there in the world, breeding like rabbits, and the kids they're bringing into the world don't stand a chance. And these are the adults of tomorrow. We already see an entitled generation coming of age; 30 year old "men" whose parents have to legally evict them to get them out of their basements. We like to bash the 30 year old for this, but really... who made them that way?

I'd like to introduce you to some of the children who break my heart on pretty much a daily basis. I'm not using any real names in this post.

Ann. Ann is five years old. She's adorable and bright. She was born with a condition known as Ectrodactyly, or split hand/foot syndrome. This is a genetic thing she inherited from her mother. Her parents were both drug addicts. Her father took off when she was maybe a year or two old. Her mother lost custody of her when she was maybe two or three and then she was with another family member, and then in foster care. At the age of four she came to live with her aunt, who is my friend. Her aunt, we'll call her Michelle, is 40 years old, single and has no children of her own. Parental rights on both sides have been terminated. The mother did some time in jail and the father, who lives six miles away has never paid a dime in support and chooses meth over his child. Now the mother is apparently pregnant once again. Great. Ann is a sweet child who loves to hug people, and loves to talk, talk, talk, talk, talk. She randomly blurts out, "My mommy is in jail," and other statements to that effect. Michelle is doing the very best she can and she got Ann at a very young age so although you can see the kid has baggage, she might not have to carry it forever.

Another friend of mine, Jan is married for the second time and one of the children she's raising is her biological granddaughter, by her first husband. Why is she raising her granddaughter? Because her daughter and son in law sexually abused the little girl when she was an infant and a toddler. The girl is ten years old now and is sometimes very sweet, and sometimes very alarming. She displays some almost sociopathic tendencies and has issues with appropriate boundaries. I'm not sure that she consciously remembers the abuse but subconsciously that's a whole different story. She addresses her grandmother as "momma", though she knows she isn't her mother, and sometimes mentions her half brothers or sisters, and I'm not sure where they are or who is raising them. She's at an age where she's starting to get a little more independent and that's scary because she won't always have someone watching her.

The other child Jan and her husband are raising is a foster child. She's seven years old now and is pretty severely autistic. She was kept in a playpen for the first few years of her life, so she really didn't know how to walk, and her only food was mashed potatoes in a sippy cup so her digestive system was completely out of whack. She needs a specialized diet, and needed braces on her legs for a couple of years. She is a couple of years behind in physical development and she doesn't really speak in complete sentences. She says a word or two here and there but mostly it's the babble of a toddler.

Another friend of ours, Dan is going through a divorce right now. Almost a year ago his wife of seventeen years, who his family begged him not to marry in the first place, went whacko. That's the nice way to describe it. She was likely having affairs for many years but this time she got involved with an ex-con (who just hasn't been caught yet for what he's still doing) and she made some lame attempt at suicide (took a couple of pills and then called an ambulance herself) and was committed for ten days, which did no good at all. When she was released from the hospital she took off with the other man, leaving her husband and four year old son behind. Now Dan, who works full time at night at a hospital is raising a five year old by himself, and has to try to help the kid understand why mommy disappeared. She now has a lawyer and wants to talk to the kid three nights a week, which they allow, but she's still with the con man and they are doing drugs and there's no way she's getting unsupervised anything. The five year old also tells people his mommy and her boyfriend are in jail.

Another friend, Patrick is in the process of getting his second or third divorce. He has a daughter by a previous wife, and after their divorce she wound up going to jail because she was caught selling her ten year old daughter (not Patrick's) for sex, and pictures of the younger daughter for child porn. I don't know where the older girl is now, but the younger daughter is now eight years old. She's a handful. Her father apparently wanted a son, so he's not particularly involved with this child of his, and he now lives with his brother, Dan (see above, he's raising a five year old son) and the girl acts out a lot. She can pick up on being a disappointment, and any attention she can get, even if it's bad attention is what she's after. I gave her a hug today and told her, "You're better than that." I don't even know what to do.

I just want to grab people and shake them and ask them, "WHY ARE YOU HAVING CHILDREN?" Why is there not some kind of licensing mandated for parenthood? Why is there not mandatory sterilization for people who have proven they can't be trusted to care for children? These kids are struggling to figure out what kind of foundation they're standing on - is it rock, is it sand, is it going to crumble out from underneath them? They don't know what 'normal' is, if there IS such a thing anymore. They're desperately looking around for someone to tell them or show them where they fit in, what their value is as a human being, what they can count on, what's safe... Who's going to show them that? If not their parents, then who? There are people out there having children who shouldn't even be allowed to have a pet rock.

I thank God for the intervention of family members in these situations. But there's a lot of damage to try to undo. Will these kids grow up to be well-adjusted adults? I don't know. I know that right now they're hurting in ways that most of us can't imagine, at a time in their lives when they're supposed to feel safe, and loved and be out having fun, exploring new possibilities and discovering themselves.
I know in the end that those parents are going to pay a heavy price. I know what Jesus said in the Bible many times about children; how much he loved them and what the penalties were going to be for people who mistreated them. My hope is that these kids all understand that even though one or both of their biological parents didn't want them, or didn't love them, that they have a Father in Heaven who does love them, and does cherish them. And until they understand that... I pray that we can all fill in some of the gaps with Jesus' love on his behalf.

Tonight especially, I'm praying for guidance and wisdom on what God wants me to do with this. 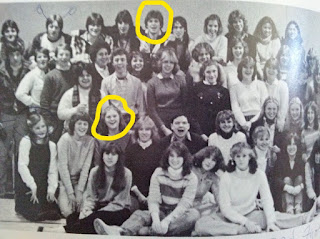 You May Have Been Evicted Because..... 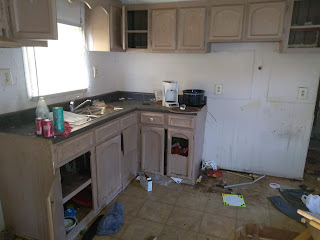 I would probably do it more often except that nearly every time I post, some random former tenant will start tearing up the thread, accusing the company of having evicted them for absolutely no reason.

Because that's what landlords do. They find tenants who are paying their rent on time and keeping the property in good condition and they evict them, just for fun. Because empty homes generate lots of income for them.

There was a highly offended couple who had to vacate their premises just two days. I walked through the home this morning. I wish their new landlords lots of luck. Click the link below to come on a video of today's tour with me. If you dare....

Take a Walk on the Parkside with me!

Attack of the Hair Creatures! 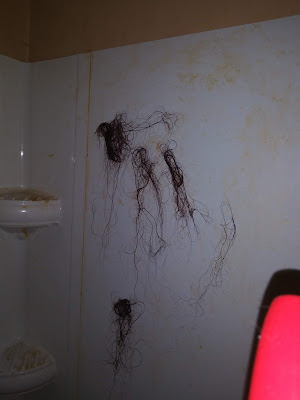 Even I shrieked in terror.

Seriously. Someone was showering with these creatures. My husband questioned what sort of foul adhesive was holding those creatures to the shower wall. Sincerely, isn't getting clean the point of taking a shower? How do you accomplish that in this? Are you going to complain about the landlord on social media when you don't get your security deposit back?

Could you sleep knowing that this was lurking in your master bath? I couldn't. Then again, I haven't touched on the horrors of the master bedroom.

Good night, sleep tight, don't let the bedbugs bite. Ever heard that? Ever wonder what a bedbug really was? Or if they actually did bite?

Ever wonder what the place you are living in might have looked like before you got there? Give that some thought tonight.